A "brag" section to show off your lastest creations;
Post Reply
4 posts • Page 1 of 1

I've always been interested in the flies and nymphs used in the USA for the steelhead runs – after, all our rainbows came from the Russian River - relocated away from the sea here in NZ and adopted the very large Lake Taupo as their sea instead and spawned in the several feeder rivers and streams. The same progression is happening down in the South Island around the McKenzie country canals & lakes.
Kiwis are no stranger to American flies, and many of us use the Adams, Wulff, Humpy and grasshoppers, in fact the Adams Parachute is my go-to searching fly in new waters. Elk Hare Caddis is another very effective fly whether there is a hatch or not. CDC feathers have made an excellent variant.
What caught my eye recently was reference to a steelhead nymph called the “Pink Squirrel” created by John Bethke. Adrian Bell's “Galah nymph” is so similar it's uncanny and answers a question that's been around since the early 1980's when we used the Galah with so much success on the Lk Taupo rivers, it simply is such a good nymph. John's original has materials that I don't have so I set out to make a variant as close to the original.

The appearance should be hairy, spiky, munchy. tasty.
Another steelhead nymph I came across and have tied is the “Orange Crush”
well worth a look at some time.
p.s. the pic's colours are washed out due to not having a decent macro. 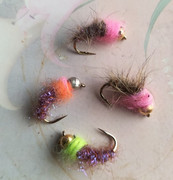 They look good, and are sure to work.

Should do Andy. Rainbows seem to like orange and pink. We are getting the bad weather as you know so it's staying warm and keeping the fly vice working. Done some big clear outs amongst the fishing stuff !. Cheers