A tribute to John Parsons

A tribute to John Parsons

His favourite nymph was A.Colonica, the net building caddis, and he used this almost exclusively in the rivers around Taupo. It's a simple tie, he insisted on a #10 curved hook as netbuilders don't often stand to attention especially going downstream. The nature of the Mustad long shank 31470 hook he used meant a lot of trout lost, but also a lot of trout hooked. Weight was achieved with copper wire and the body dubbed around the bend was a brown possum fur ribbed with fine gold wire followed by a hackle of dark possum. A black wingcase finished the nymph as he believed that the distinct black segments behind the head of the caddis was an important part of the imitation, and perhaps this was a supernormal trigger.
I tie a similar one called a bead head possum and copper - there's always one or two hanging around my nymph tin. John was an avid and observant fly fisher, author, a fine photographer, a collector of beautiful books. I met him once in Taupo and spent an hour with him in his little upstairs office – I wish I could have spent a few more hours fishing with him, but his pattern lives on in the pools and runs of his favourite Taupo rivers and I'll tie a couple tomorrow on some long shank caddis hooks I've got lying around. 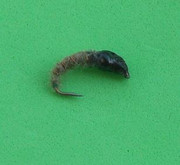 Re: A tribute to John Parsons

This is as close as I could get to his original. What is missing is the green polyblende fibres that he sometimes added to the dubbed body. Don't think John would mind 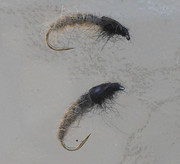